One of the big goals for this summer’s research is to initiate a long-term island-manipulation experiment on small islets near Naxos and Paros. The logistics and permitting for the experiment have been far more difficult than I’d anticipated, but while I am working with collaborators and government officials to finalize the plans, the first priority was determining whether the dozen islands I’d identified based upon size, vegetation and location would be capable of supporting these introduced lizard populations.

Johannes and I set out from Naxos on the morning ferry to Paros, with the trusty “Panda” in the belly of the ferry. After arriving on Paros, we took a quick drive to the Bay of Naoussa, which is home to 5 beautiful islands, seemingly perfect for the study. We chartered a small fishing boat and the old engine put-put-putted its way out to the islands. We decided not to kayak this time in order to get a better sense of the seascape and to ensure that we could make it to all 5 islands within the afternoon.

Our trusty island-hopping boat. I’m not sure if it even had a name.

The islands we were visiting were very small, relative to much of the Cyclades, but absolutely the perfect size for our purposes; large enough to support a decent population of lizards, but not so large as to be impossible to survey in the future. 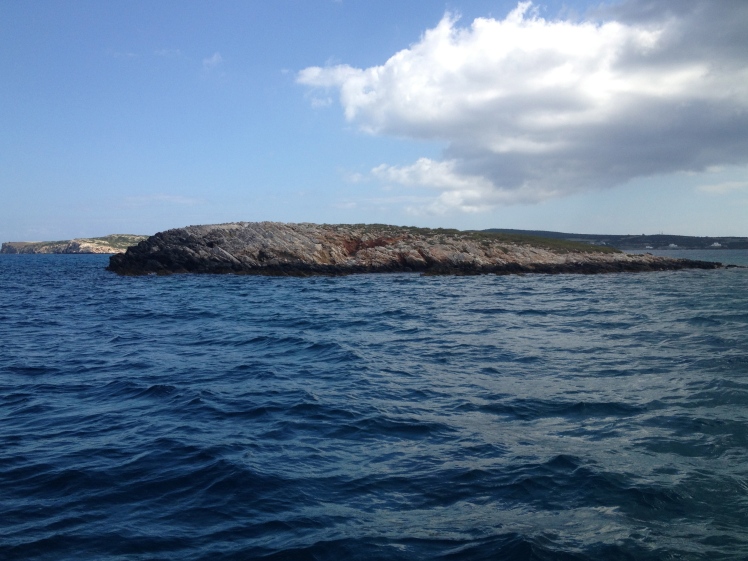 These are quick shots from the phone – I haven’t had a chance to upload pictures from my other camera yet, but they’re all really beautiful islands.

We got some lucky breaks: all of the islands have enough vegetation and insects to seemingly support a healthy population of experimental lizards. They’re also similar enough in many important characteristics (size, proximity, plant species) to all be reasonably comparable. There were some important realizations based upon the visit though. First, while none of the islands has Podarcis living on them, all of them do have another resident reptile, a Mediodactylus gecko living under rocks. Though the presence of the gecko was consistent throughout the islands, it is a consideration I’ll have to take into account for the experiment. Additionally, many of the islands were much more structurally complex (meaning they had a lot of big marble outcroppings, spires, boulders and chasms) than I’d anticipated. This leads me to wonder whether this might not be the best way to test for wall-effects on lizards, and instead may be a better experimental arena for understanding the effects of small-island living on these lizards. More on that soon.

All in all it was a long, but extraordinarily useful outing. I’ve been thinking about these islands and pouring over bad photos and grainy google maps for a year. It was immensely helpful to do some ground-truthing to mesh the painstaking plans I’d made from my desk in New Haven with the realities here in Greece. Like always, the actual system is more complicated than I’d imagined from afar, but is also more interesting and exciting in equal measure.

One thought on “Visiting the Paros Islets”