After several “are you still alive?” emails yesterday I think it’s time to update the blog! I’m sorry for the delay, but it was for good reason: this last week has been non-stop revisiting of the five introduction islands from last year.

I’m going to stretch this out over several posts because it was a lot of work and the results are really exciting. The short of it though: we found our lizards! All five island populations had survivors and they seem to be doing well. Some island populations had spread out over much of the island, others remained right in the neighborhood of their introduction site. All of the populations had new recruits – i.e. lizards that were born last year after the introduction, and just about all of the females we found this year were pregnant! That means they’ve figured out how to survive on the islands and now we can start tracking them year to year.

Each island required either ferrying people to and fro in kayaks or hopping on and off of Captain Rofo’s excellent boat. After that, the team stomped in line over the whole island noosing, baiting, or diving on anything that wriggled (to the surprise of not a few errant geckos). 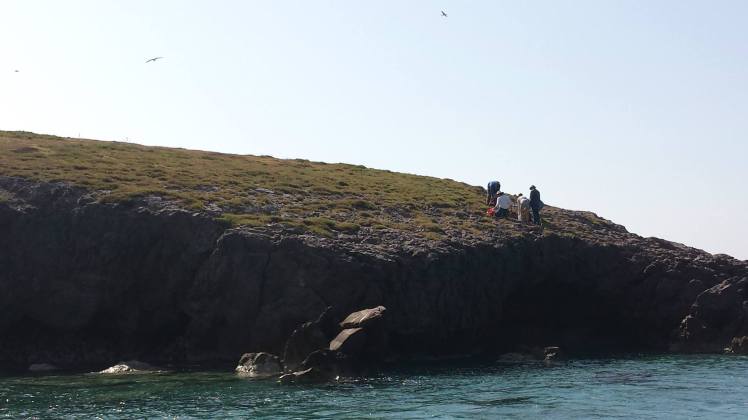 This photo was shot by SNRE MS student, Zachary Gizicki from the next island over where he was surveying vegetation for his thesis.

Once we caught the lizards, it was back to measure them, and put in a permanent PIT tag (more on that very soon!). These islands don’t exactly have a lot of cover though so we’d huddle in whatever shade we could find. Here’s a video of the team in a cave on Agios Artemios:

Thank you all of your support and excitement. I cannot wait to tell you more about the experiment, the process, and the preliminary results!

4 thoughts on “The islands revisited”