We have a new paper out today from the Greek Island system! As readers know, we’ve been tracking the Aegean Wall lizards introduced to the Greek experimental islets back in 2014. The experimental islets are predator-free, and so the lizard populations have really taken off. With this increase in lizard numbers, we’ve been finding signs of lots of competition (bite scars all over the lizards – see picture below). These conditions are prime for a whole suite of shifts in the lizards. With help from excellent collaborators, Simon Baeckens and José Martín, we’ve taken a look at the chemical signals of the males on the experimental islands. Lo and behold, these chemical signals have shifted, and even more importantly, all five experimental populations have shifted in the same way. In other words, these lizards, translocated to experimental islands, have rapidly and repeatedly developed new “love languages” now that they don’t have to worry about predators and are intent on signaling their quality. 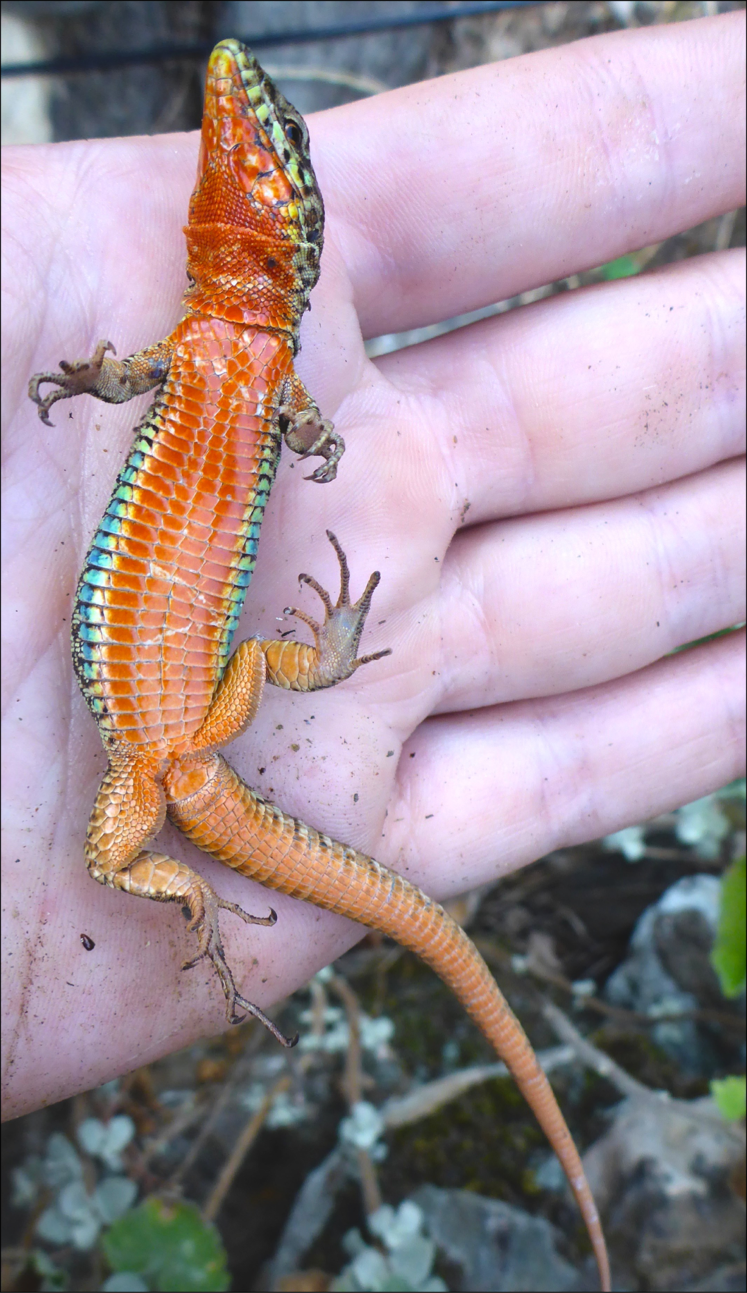 A bit more background: Here’s a picture of a beautiful Podarcis erhardii male. A few things to notice: see those large pores on the underside of the legs? Those are “femoral pores” – specialized glands that the lizard uses to exude a special waxy cocktail of chemicals. These exudates are a great way for a lizard to communicate with other lizards. We’re still working on decoding the messages being sent, but we think several of them advertise “male quality” and perhaps immune function both to other males (stay away!) or females (come hither!).

There’s a problem though: lizards aren’t the only ones paying attention to these waxy scent-marks. Predators, particularly snakes, are excellent at sniffing them out when looking for a tasty snack. There’s a tradeoff then: on the one hand, a male lizard wants to let the world know how great he is (so he can attract mates), while at the same time keeping a low profile to avoid becoming lunch.

Naxos, the site of origin for the experimental populations, has lots of snakes that love to eat lizards. Accordingly, the lizards on Naxos have a relatively “buttoned-up” chemical signal design. When those populations were translocated to the islets though, after only a few generations those chemical signals had really cut loose! No longer having to worry about eavesdropping snakes, and intent on staking their claims, the experimental island populations have significantly more diverse cocktails of chemical signals and are spiking several “flags” of male quality (oleic acid, octadecanoic acid, and α-tocopherol).

One of the particularly important findings of this study is that all five of the experimental populations shifted in the same manner. This suggests to us that chemical signals can shift between populations in a deterministic, predictable way, according to changes in their ecology.

Thanks to co-authors Anthony Herrel, Johannes Foufopoulos, and Panayiotis Pafilis, and to incredible help in the field from Claire Santoro, Anne-Claire Fabre, Kinsey Brock, and Menelia Vasilopoulou-Kampitsi.