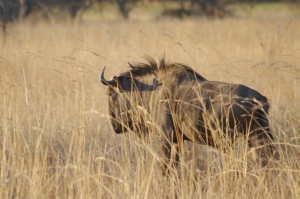 Sorry this e-mail is so long overdue. This is the first time since the beginning of the program that I have had internet access. I am 3 weeks into the OTS South Africa semester and I am having a phenomenal experience. I have absolutely fallen in love with South Africa, the culture, the people and the wildlife. I think I will never tire of coming around a corner and finding a family of elephants (or ellies), but I am getting ahead of myself.

I landed in Johannesburg Aug. 29 after a marathon flight from D.C. I quickly met up with the group and we headed to Nylsvlei (pronounced nells-flay), which is a national park situated on a beautiful wetland system. Nylsvlei doesn’t have the big 5 (loosely defined as the animals big enough, hungry enough or fast enough to really give you a hard time) so we were able to walk anywhere in the park. This made for some amazing wildlife viewing. I went on sunrise walks with friends (one solo hike was 25 or 30 kilometers long) every morning and usually saw ostrich, zebra, giraffe, wildebeest and many other antelope and if we did a bit of searching, massive baboon spiders, scorpions, geckos, skinks, leopard tortoises, and even once a rock python. The birding along the wetland (vlei) was also fantastic, there are some truly breathtaking birds here. While at Nylsvlei we had many lectures on savannah ecology and the culture and history of

South Africa giving us a bit of background for the rest of the trip.

After Nylsvlei we traveled north to the University of Witswatersrand’s rural facility. This is another closed game park and so we again had free reign, though it was surrounded by private game reserves that stocked the big 5 so occasionally on walks we could hear the trumpeting of an elephant or the roar of a lion. Wits rural was primarily a cultural experience in that it is very close to one of the homesteads populated by hundreds of thousands of poor black Africans forced to relocate during apartheid. We took two trips to the homesteads, the first to visit two families to get a sense of the family structure and the schedule of day-to-day life. I was most struck with the poverty and yet generosity and kindness of the people. The people were living in dire straights without reliable water and almost no source of income, and yet offered us part of their noon meal and welcomed us heartily into their homes. The second trip was a full day’s tour of the homestead. We were greeted by traditional dancers, met with the village chief, were served a traditional meal including sun dried caterpillars as large as any I’ve ever seen, met with traditional healers and I even had my fortune told with the throwing of a bag of bones. I still get goose bumps from the fortune teller, it was a pretty surreal experience in that she described aspects of my life with unsettling clarity. The children of the homestead were also pretty amazing–welcoming, friendly and anxious to have their pictures taken. I could hardly take enough pictures of them. I think I ended up taking over 300 pictures that day.

After Wits, we went north and east into the Kruger National Park, where we will spend the majority of our time. I am currently staying in the Shingwedzi research camp, which is very nicely set off, away from the tourists. We are seeing elephants, giraffe, zebra, baboons, crocodiles and countless birds on a nearly daily basis. It has been magical seeing these animals in their natural habitat without fences or bars. It will be hard to go to any zoo back in the states. We just finished a project with a herpetologist from Wits who lectured on the diversity of herps corresponding to various ecological niches. With him we found many skinks, geckos, small snakes and a really incredible spitting cobra. It was a really fun three days in the field, flipping rocks, never sure what you’re going to find underneath. I did have one close brush with an angry scorpion, which turned out to be the most venomous scorpion in South Africa, that was pretty exciting!

I am in the thick of another independent project now for which I am studying the impact of fires on invertebrate diversity. I have found 85 species of invertebrates so far, including 30 species of spiders, so needless to say, I’ve been having a blast and putting the camera to good use. So little is known about invertebrates, and especially spiders in the Kruger that I am hoping that I find a few unique specimens, we shall see! I am going to be in Shingwedzi for another 5 days or so and then we are moving south in the park to Skukuza where we will stay for a couple of weeks. Over this time I will have internet access on and off so please send e-mails and I will do my best to respond. Argh, a vervet monkey just climbed in through the window and stole some fruit!

I hope all is well with you and the fall is progressing wonderfully. Send a message if you can, I’d love to hear from you, and I promise to do my best to respond.