Sorry for the delay in posts. I was working through the data from the island manipulation experiment to share with you, but analysis started getting complicated and then I got busy getting engaged. Hurrah! I’m in the last field research push though so I’m going to try to post several updates over the next two weeks while I’m still in Greece.

The first fun story: I’ve found a very old map of the bay of Naoussa where five of my experimental islets are located. I want to share it with you.

There’s a section of Athens around the Acropolis called Plaka, and in one corner of Plaka, a small cluster of very old book stores. One in particular – I don’t know its name and can only find it once I’m lost and have nearly given up trying – has dusty drawers filled with old maps. The shopkeep is just the kind of barely sociable gentleman you’d expect with squinty, shadow-strained eyes and a suspicious air like he hasn’t quite made up his mind whether or not he’ll suffer to sell his wares to tourists.

I asked him about maps of Paros and he was at first somewhat reticent. Once I started rattling off names of bays and islets I think I convinced him I was worthy of seeing “the good stuff” and all of a sudden out came this tome from the 18th century:

If my Roman numerals are correct, it was published in 1782 and contains beautiful maps and illustrations of Greece. The book has numerous plates of landscapes and culture (alas, I wasn’t allowed to take pictures of those) and one beautifully detailed map of the bay of Naoussa in the north of Paros. 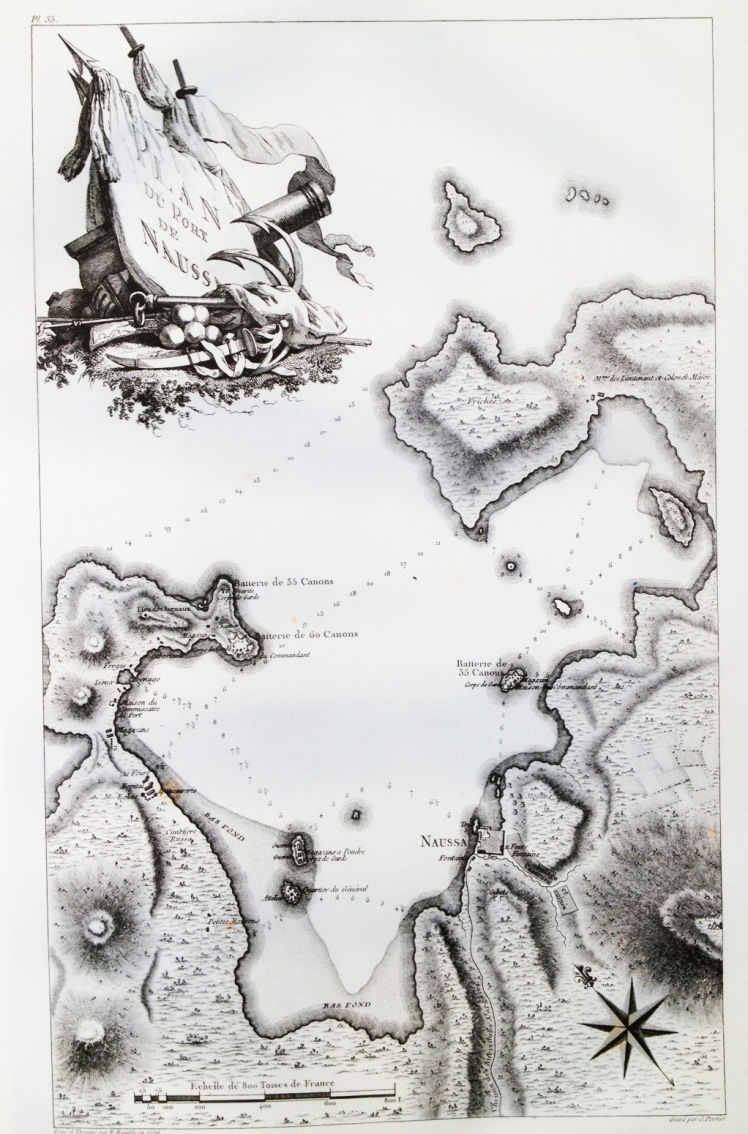 The map was made in 1776 (date in the lower left corner) and is beautifully detailed with depth measurements, labeled islets, and interestingly, a count of the arrayed armaments throughout the bay. Naoussa at the time was a well-fortified stronghold (though I’m going to have to do some more reading to find out who, at the time time, was using it to defend from whom). Here’s a detail of some of the canon counts:

The map is beautifully detailed:

Interestingly, the scale of the map is in toises. A little reading suggests that this length is around 6 feet.

All five of my islands are accounted for, however there are some interesting differences. In this detail for example:

The large island without any detail (or canons) is Mavronissi, which is now two islands in close proximity separated by a narrow channel. I’m not sure if F. Kauffer just decided to omit that detail or if the island really has changed that much in the last 250 years. The small island directly north of that with a plus sign no longer exists. Sea levels have risen in the last 250 years but I’m going to have to do some more investigating to sort out what’s going on there. Finally, the large island directly east of Mavronissi is now solidly connected to Paros. All traces of these canons are long since gone from the islands, but it was fascinating getting this glimpse into the history of this area. Unfortunately I couldn’t afford the original map, but I did convince my new map-selling friend to give me a high-res scan, so I’ll be pouring over the details for quite a while to come.