We’ve just finished the first week of the 2018 introduction island survey and the lizard populations are doing well! Week 1 was focused on the islands to the north of Paros in the Bay of Naoussa: Galiatsos, Mavronissi, and Agios Artemios. The population densities on Mavronissi and Agios Artemios have remained about constant since last year but Galiatsos increased substantially again. We’re still working on entering the data so I don’t have a good sense of what’s changed this year, but I’ll be eager to crunch the bite force numbers as soon as they’re in the books.

The days have consisted of setting out and kayaking in the mornings, catching lizards all day long, returning to the hotel with a bag full of lizards, and measuring until we’re through with them. Then we start again the next day. 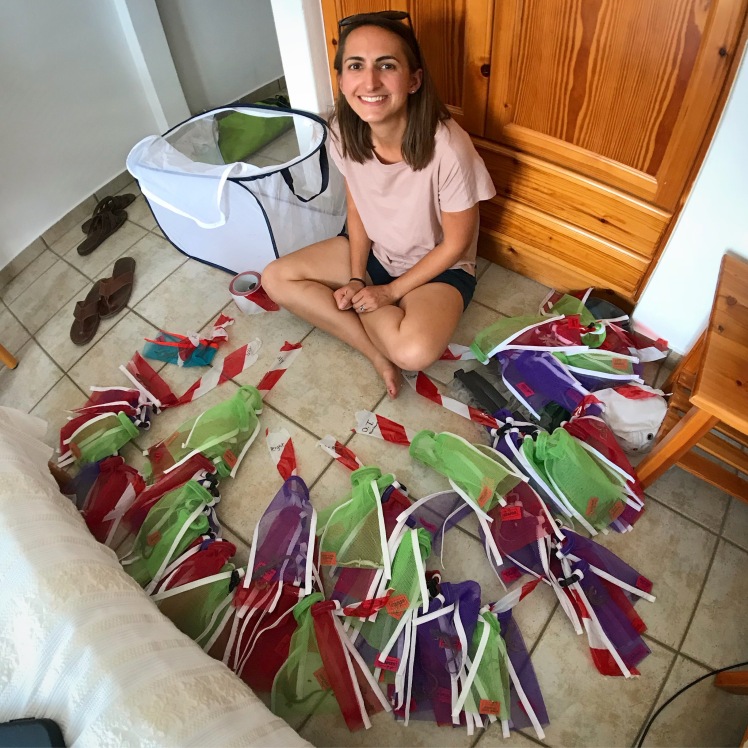 The substantial increase in lizards on Galiatsos was a bit of a challenge this year.  Usually in the past we’ve set up flags around the islands as we catch so we can return lizards exactly where they were first sighted.  With nearly 200 lizards though, by the time we were finished, Galiatsos ended up looking like more flag than brush. Returning the lizards ended up being a monumental task so we changed tactics for Mavronissi and Agios Artemios, setting up neighborhoods around the island. Here’s our map:

It ended up being a terrific solution and now we have some convenient island subsets to compare into the future. We saw substantial differences in density between the different neighborhoods and I’m eager to see if there were any differences in the lizards themselves.

We’ve had to take the weekend off from lizard catching because of high winds – when the waves are too high we can’t jump from the boat to shore. But, we’re at it again tomorrow morning and heading to Petalida. Our fingers are crossed for lots more lizards. Stay tuned.

5 thoughts on “One week into lizard surveying”