Last week I was invited to give a seminar at the University of Kansas. I’d never been to Lawrence Kansas but it often comes up in lists of surprisingly excellent places to live. Go figure! That said though I did know all about the KU herpetology collection. It is famously one of the best natural history museum collections of reptiles and amphibians anywhere around. I was looking forward to sharing my research, eager to see the lizard collections, and I had high hopes for meeting new people in the department. The trip was a success across the board.

First, the natural history museum. Like all the best natural history museums, you’re greeted by a massive dinosaur [Lepidosaur*] skeleton. This one was a mosasaur – the state fossil of Kansas that died just a little ways down the road from the museum (geologically speaking) 66 million years ago.

The real highlight of the natural history museum though was this incredible panorama diorama stretching almost a full 360 degrees and spanning a tropical forest to an arctic ice shelf. Here’s only a brief glimpse of the temperate zone. 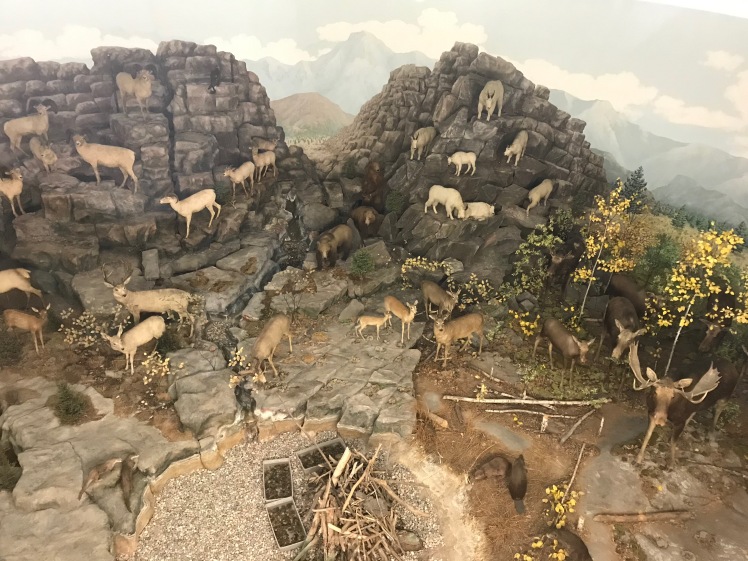 You can see the moose, beaver, deer, and bear to get a sense of the scale. All of those animals are life-size, I’m just taking a photo from a balcony one story up. The panorama has a fascinating history – it was unveiled at the 1893 World’s Fair in Chicago and was a show-stopper, as you can well imagine. KU has some great additional information about it.

While at the museum I went into the collections to get some measurements of a rare lizard species that I’ve been trying to get my hands on. KU is one of the few places in the world with specimens. Wouldn’t you know it… the specimen was out on loan! Just my luck. Guess I’ll have to come back when it’s returned. 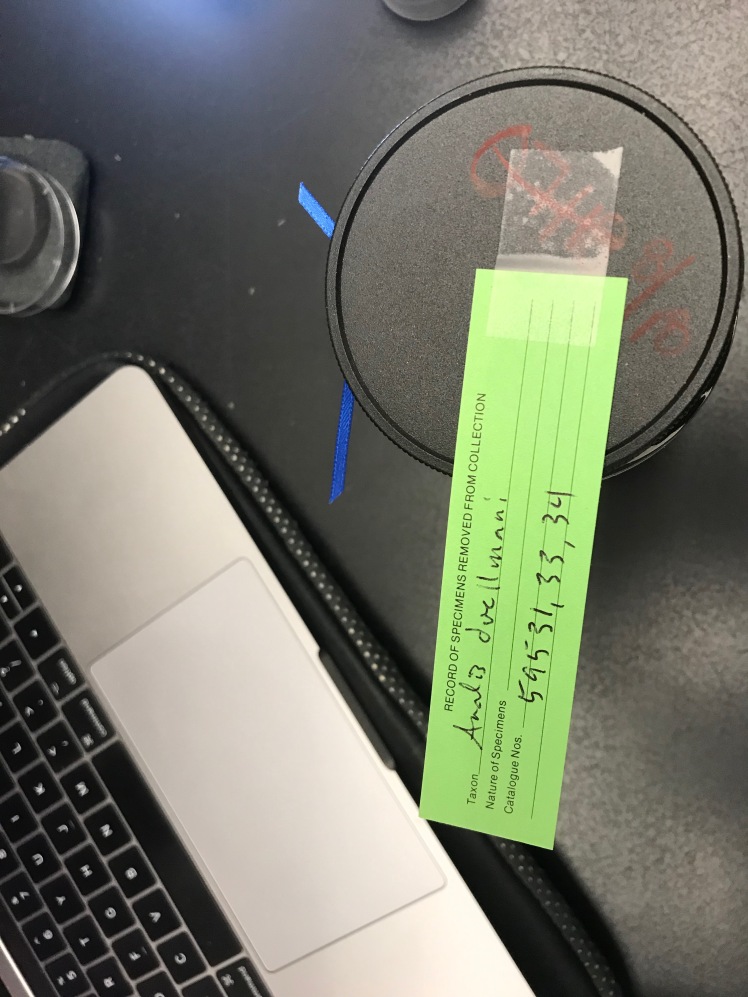 Most of my visit was spent talking with professors and students on campus. I won’t bore you (or embarrass them) with the gushing, but the meetings were equal parts exciting, challenging, and exhausting. Walking from office to office to talk first about plants, then fruit flies, then fish, and lizards really keeps you on your toes. Following all that up with a seminar in the afternoon makes for quite a day. I will use the talk as a brief excuse to give a brief overview of what I’ve been working on lately though:

I called the talk “Humans to Hurricanes: Drivers of trait changes in the Anthropocene.” I’m trying to turn it into a bit of a “stump speech” that I can tour with to talk about my research (and hopefully use as a backbone for future job talks). Thanks to Claire for listening to (and kindly rejecting) about a dozen other titles.

The goal of my research is, broadly speaking, to understand how animal traits change with ecological context in order to generate conservation-relevant predications for the cascading effects of animal evolution in human-dominated landscapes. I focused the talk on four ongoing projects, all with different angles on generating and applying those evolutionary insights. 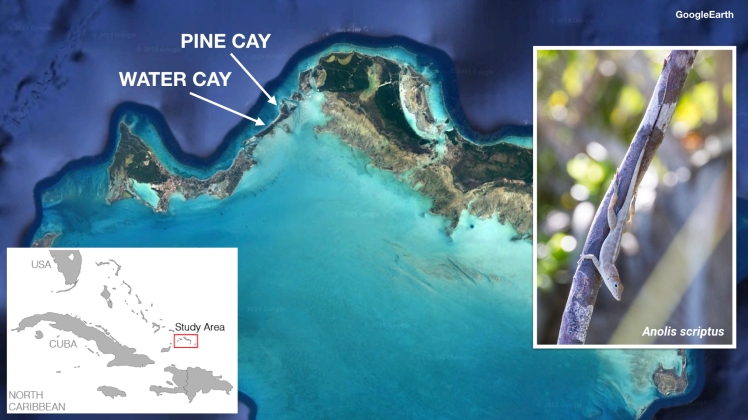 First up was my recent study in Turks and Caicos investigating the effects of hurricanes on native lizard populations. I’ve mentioned it a few times already on the blog, but if you don’t know what I’m talking about Wait Wait, Don’t Tell Me! can catch you up.

The follow-up to that study is in peer review now, so I won’t spoil the surprise. I’ve kept working on hurricanes though to find out if the selection event we observed post-hurricane resulted in effects on the next generation of lizards on the islands. Stay tuned!

From Turks and Caicos I shifted our attention to the Greek Islands where, in contrast to the serendipitous hurricane study, collaborators and I have been methodically monitoring populations of the Aegean Wall Lizard on five experimental islets. 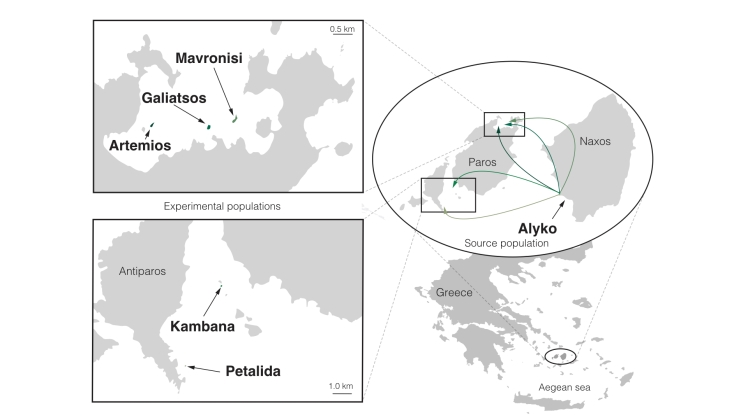 This study is slowly and surely teaching us lots about these little lizards. One of the interesting stories (that was just accepted for publication!) focuses on chemical signaling with these specialized femoral (leg) pores. A friend, Simon Baeckens, has been doing a lot of the work putting this story together – I’ll write a full post about it when the paper is published in the next couple of months.

This next slide sums it all up: overall we’re demonstrating that the morphological, behavioral, and performance traits of lizards can rapidly and repeatedly change in response to their ecological context. The “repeatedly” is particularly important because that means we might be able to use these observations to make predictions for other species in other situations.

Which is exactly what we’re trying to do on Redonda. I’ve also posted about the Redonda restoration project before. This project is in close collaboration with Anthony Herrel, Shanna Challenger and Jenny Daltry. We’re investigating how these three species of lizards change following the eradication of goats and rats on the island of Redonda. Read more here! 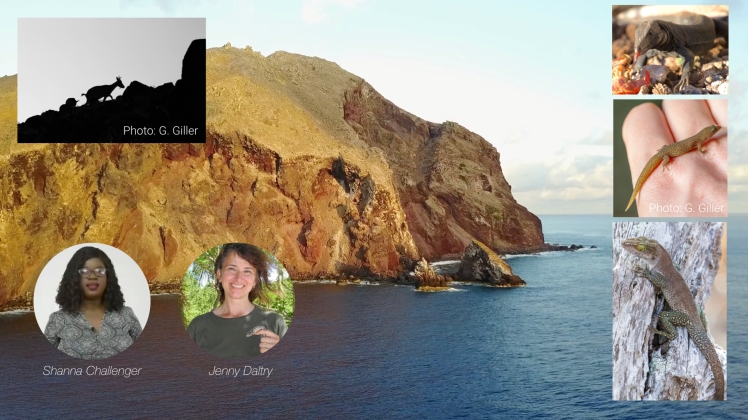 Ultimately, my goal is to put these insights in the context of conserving and managing animal populations in an increasingly human-dominated world. Nowhere are those human impacts more notable than in cities, so my next project is going to be directly investigating urban evolution, urban ecology, and urban conservation.

As with my talk, I would be remiss in not mentioning the many collaborators, research assistants, funding agencies, and tireless cheerleaders have helped make this research a reality. I’ve been immensely fortunate to work with these passionate and inspiring folks and I couldn’t have done it without them. 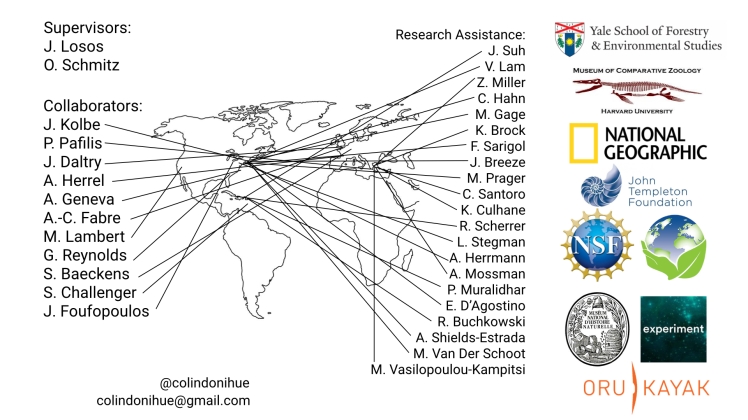 *Thanks to reader Scott for keeping me honest on my taxonomy. Dinosaurs belong to the group Archosauria whose living relatives are now birds and crocodilians. The mosasaur gracing the entrance of the KU natural history museum is a Lepidosaur – an entirely different group of scaled lizard and related to the modern lizards I study today. I’m sauria for the mistake.

3 thoughts on “A quick detour to Kansas”