Pre-dendum: I’d originally outlined a series of posts talking about each week’s lecture from my course at Colby College on biodiversity conservation. In the last few weeks though, well, everything’s been turned on its head. My heart goes out to my friends, family members, and the many strangers on the front lines of the struggle against COVID-19. I’m no help in hospitals, but I realized that I have some ready-made classroom activities that might be useful to the teachers and parents looking for ideas for remote classes. I’m going to try to rework some of the posts with that in mind. And maybe, if that’s not a help, I hope I can provide at least a brief interlude of not re-reading headlines and infection statistics. If anyone has any questions about any of the material please feel free to reach out and contact me.

The first week of my Conservation Biology course at Colby College had a lot of ground to cover. Because we were a class of mostly first and second years with interests all over campus (a minority of the students were planning on Biology or Environmental Studies majors), we had a lot of catching up to do to get everyone on the same page.

First and foremost: What is biodiversity?

Not surprisingly, E.O. Wilson featured prominently. In particular, I introduced them to three “types” or levels of biodiversity typically considered: Ecosystems, Species, and Genetic. All three levels of this hierarchy have important implications for biodiversity conservation. Often we think of conservation targeting species of interest, but sometimes whole ecological systems can be the targets of conservation in efforts to maintain or restore ecological functions or conserve whole ecological networks. Similarly, genetic diversity can play a crucial role in conservation: populations lacking genetic diversity are particularly susceptible to threats. Therefore, understanding this hierarchy and the interplay of the different levels is important for assessing conservation threats and making conservation decisions.

We then discussed patterns of global biodiversity and species threats. 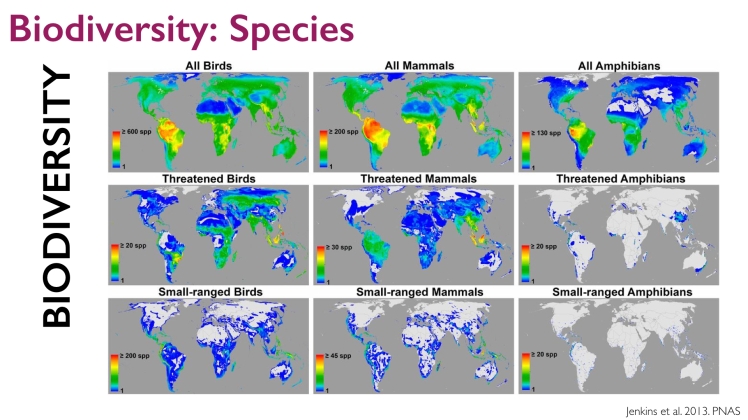 Here is a classic paper by Jenkins et al. in PNAS. As can be seen in these maps (and numerous other studies), biodiversity tends to be higher in the tropics and many of these species are disproportionately under threat.

Focusing on patterns of species, however, leads to the outstanding question: “How do scientists count species?” and “How many species are there?” This was a great chance to poll the class and people were all over the place in their estimates (hundreds of thousands to billions). Actually, the scientific estimates don’t show a lot more consensus. There are some 1.3 million described species and a whole lot more to go… just how many though, particularly when we start factoring in microbial diversity, is a wide open question. 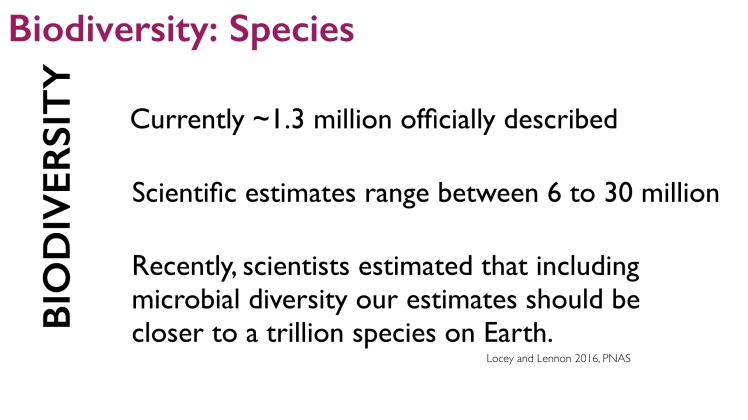 All of these conversations about counting species led to the first class activity of the term: measuring biodiversity ourselves. Scientists use a few different metrics for measuring biodiversity: species richness, species evenness, and species turnover.* Tough one is species evenness. For this one take the number of individuals of each species (n) and multiply it by one fewer (n-1), add that up for each species, and divide by the total number of individuals of all of the species (N) multiplied by N-1. 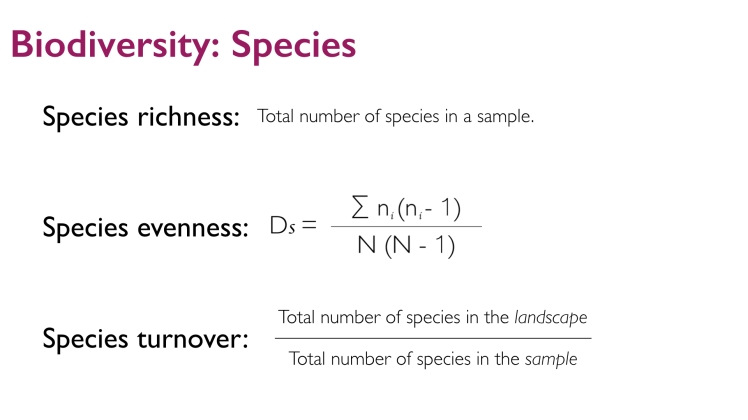 Here are the metrics illustrated in three fictitious island populations of shapes. From left to right, you can see that population one has the highest species richness with five different shape species. Population three only has two species but they’re pretty unique! 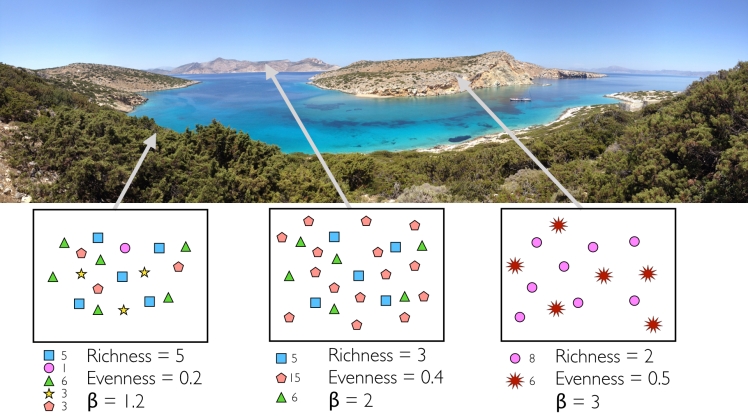 This is hardly original, but I’ve got a keen sweet tooth, so I decided I’d bribe them all with bags of candy on day one to illustrate how to calculate these biodiversity metrics. Thanks to my mother for helping sort, count, and make sure there was some tricky diversity grey areas for them to argue over. 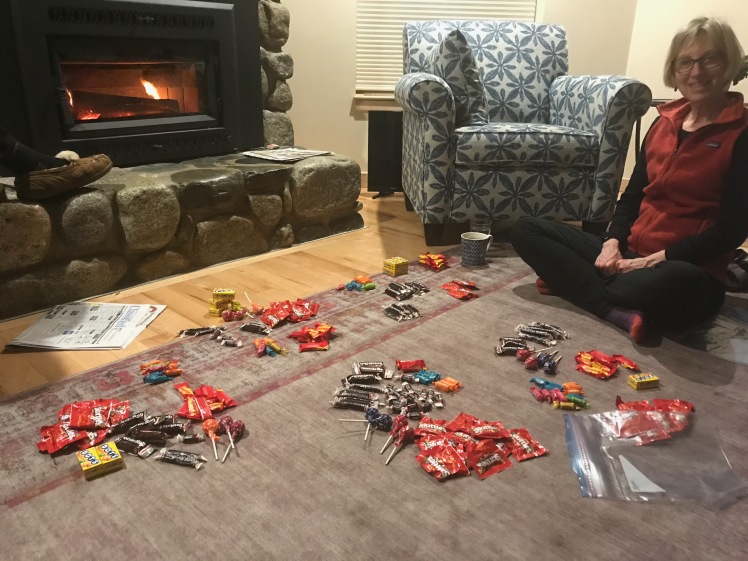 I had the class break up into five groups of four, divvy up their candy “species” and calculate the richness and evenness of the species in their bags. Turnover necessitated talking between tables which led to the first “tricky” teachable moment. As hoped for, different tables used different criteria for defining species; small- medium- and large tootsies for some tables were “age classes” and in others separate entities. This is a problem in conservation as well – sometimes populations and species aren’t well defined and so sorting out how best to talk about the diversity present at a site can take a fair bit of work. We had an engaging discussion on whether the strawberry tootsie rolls should be lumped into the chocolate mini rolls which should themselves be lumped with the extra wide tootsie logs. Everyone agrees, obviously, that tootsie roll pops are their own species (and a far higher conservation priority!)

To really cement their understanding of diversity I had them go home and calculate diversity of three populations of “things”. They could choose any things they liked – socks in three friends’ drawers – book spine colors on three different book cases – and then calculate diversity, evenness, and turnover. All in all, students did a great job. No one calculated diversity in the dining halls – I was hoping there might be some interesting salad bar calculations, but we got a lot of pictures of shoes to count. Who knew how many species of shoes there are! 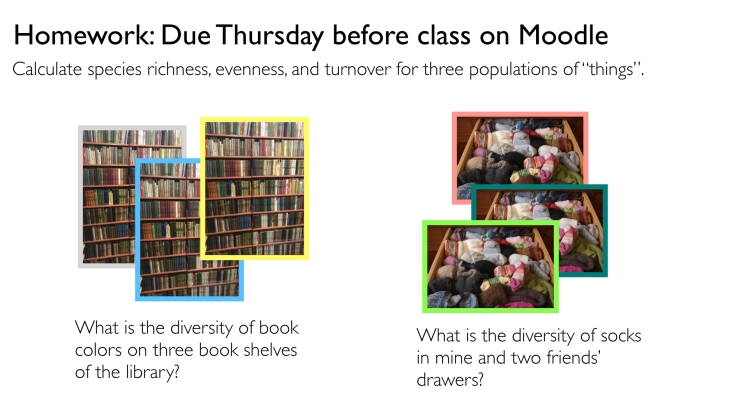 I highly recommend this as a diversity assignment that’s easy to do at home, or in a back yard. As an additional extension, consider this similar project trying to assess biodiversity in one cubic foot, in lots of ecosystems all around the globe. E.O. Wilson wrote a terrific National Geographic article about the project here.

*There is a humongous body of literature around the use of different diversity metrics and many strong opinions about which to use and when, so don’t holler at me in the comments about taking the easy way out and focusing on some of the simpler calculations!

2 thoughts on “Week 1: What is Biodiversity Conservation”