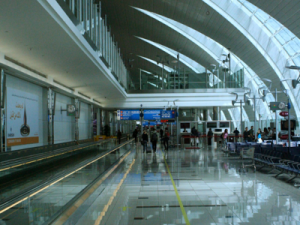 Made it to Dubai!

Oy, my flight from New York to Dubai was a study in extreme sleep deprivation. After getting less than an hour of naps in the JFK airport I had great hopes of catching up on sleep on the leg to Dubai. Instead I lay awake for nearly the entire trip feeling worse and worse without being able to sleep at all.

We rode on a beautiful plane which was definitely an upside. 10 people to a row with each chair having a personal television screen with all of the movies, television shows, maps, CDs, games and other options one could possibly want. I spent the first 3 hours playing games and watching a movie but then decided it was time to sleep. I spent the next 5 hours trying to force sleep on myself and only winning about an hour. Eventually giving up I decided Mulan and Aladdin were the only movies that I had the stomach to see and so spent the remainder of the trip watching those. All in all 13.5 hours in the air, one hour of sleep, three movies and it’s Monday all of a sudden.

The Dubai airport is beautiful. Actually all of Dubai was extremely impressive as we flew over. The entire city seems to be building up and out all at the same time. It’s amazing. The airport terminal under construction adjoining ours had some 8 or 9 extremely tall cranes all working and from what we could see of the city there were even more massive buildings under construction. I managed to see the world’s tallest building as well. It was astounding – just a needle into the sky towering over an already very impressive skyline.

Of course this was all I could see from the plane while taxiing in. As soon as we got there we continued on to our next gate and I immediately lay down on the ground and was asleep. You know things are bad when all of a sudden stretching out on an airport floor feels luxurious.

I managed a good hour and a half nap or so and then we boarded our plane for the final leg to Nairobi!

Ben requested a few pictures of signs in arabic 🙂 Here they are! It was really neat seeing mosques every couple of blocks on our flyover and seeing and hearing so many different languages being spoken.