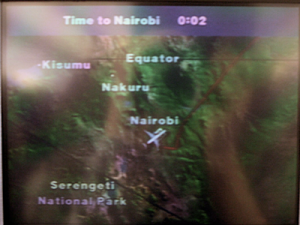 After the impossibly long flight from JFK to Dubai this little hop and a skip seemed no problem! (We traveled 11,147 km  from JFK to Dubai – I forgot to put that in the last post). This leg was only about 5.5 or 6 hours which felt infinitely better. And! I started catching up on sleep.

I stumbled onto the plane to be greeted by the extremely friendly cabin crew. I must say, Emirates has lived up to its reputation for being an extremely nice airline. As I passed one steward he greeted me with a cheery “Hello! Welcome aboard, how are you doing today?” To which I replied “Thanks… I’m pretty tired actually.” His response: “Yeah, I can tell.”

In addition to being shorter this flight was much emptier. Kayla, Walker and I were seated in a row of four in the middle of the plane but without a fourth person we were actually able to stretch out. Or I should say, I was able to stretch out. Bless their hearts I took up the middle 2 and a half seats (the half being Kayla’s lap) and, though still a bit scrunched was able to sleep in fetal position for much of the flight. It was much needed and much appreciated – I owe them big time.

I saw the same steward on my way out, he said “Looks like you managed to get some sleep!” in that same jolly voice.

We arrived in Nairobi and in a haze navigated through customs and immigration (though it was welcome the 4 and a half hours of sleep were really just a drop in the bucket of getting caught up.) Much to our relief we were able to get visas at the gate (yipee!) and didn’t have any trouble getting through customs. We were picked up by our driver without any problem and driven to our hotel and blissfully allowed to go to bed!

I’m in the hotel now and will tell you all about it as soon as I take a few pictures to show you.