Last weekend Claire and I cruised out of Boston Harbor in search of the mighty migrating mammals swimming the nice cool, food-filled waters off the coast of the cape. I haven’t been whale watching in years and I was looking forward to this trip so I could get some practice with my new camera (I suspect that’s going to deserve its own post one of these days), soak in some fresh sea air, and most especially, show Claire her first wild whale!

We set off out of the dock behind the New England Aquarium (the cruise is actually run through the aquarium). On shore the weather was a sunny 75, soon to be pushing 80, but as soon as we got through the islands and the captain opened the throttle we were happy for our jackets. With wind whipping our hair and muffling our conversation I excitedly took pictures of anything that moved (and a great number of things that were only moving due to our speed). I won’t bore you with a hundred photos of the old civil war fort in the harbor or every single sailboat, lobster boat or other floating passer-by, here’s just a shot of the Boston skyline looking back.

Once we cleared the islands around Boston our speed increased and we began feeling the swell of the ocean. Claire and I strategically positioned ourselves right at the front of the boat to best see whales. This had the indirect advantage (?) of enhancing every dip after each roll of the sea. While the first several elicited excited squeals from the youngest passengers, the rolling action soon had me fixedly staring at the horizon “searching for whales.”

Eventually we reached our destination, Stellwagen Bank National Marine Sanctuary. It wasn’t long before we spotted our goal far out on the horizon. It was hard to hold back a hearty “Thar she blows” in the spirit of our Boston whaling predecessors, as the same thrill of the hunt was upon us. We all too slowly motored closer to the whales so as not to disturb them overmuch, and began to watch the leviathan ballet that was feeding time.

These were humpback whales (Megaptera novaeangliae), healthy and, to my eyes, mature. While likely not yet tipping the scales at a full 40 tons (give them another couple of months of replenishing their fat stores), these creatures were every bit of 30 feet long and their slow, unimposing massiveness was humbling to behold. Three of the whales nearest the boat were cooperatively feeding by blowing a large, but ever-shrinking, net of bubbles around a school of fish. Eventually, upon some signal beyond our capacity, all three whales would come rushing to the surface, mouths agape, swallowing thousands of the little baitfish that will help generate the reserves that will sustain them through a winter of fasting. The whales would then loll at the surface, sometimes slapping their fins in seeming pleasure, straining the water through their several hundred baleen plates.

I could have watched the whales all day but all too soon it was time to head back to Boston. In all there were some 15 humpback whales within eyesight with a minke whale (Balaenoptera acutorostrata) darting around the boat from time to time. I made good use of the camera’s 8 frames of continuous shooting per second (sorry, dorky camera excitement seemed necessary at some point in this post) and got many a picture of whale backs and whale tails. Here are a few more to wrap up the post: 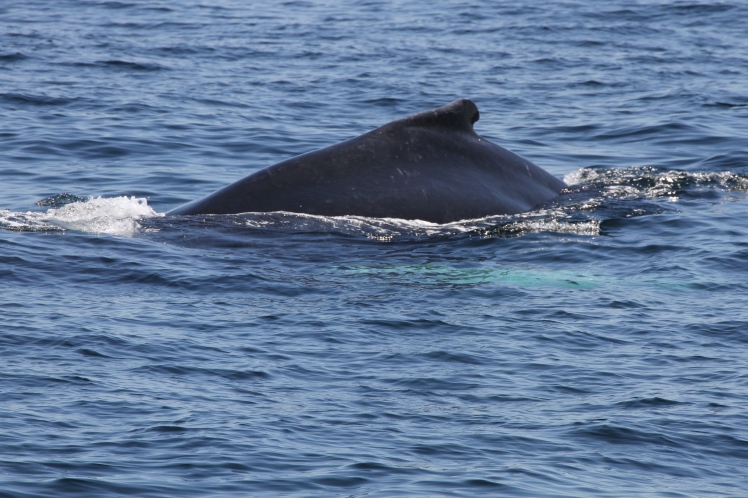 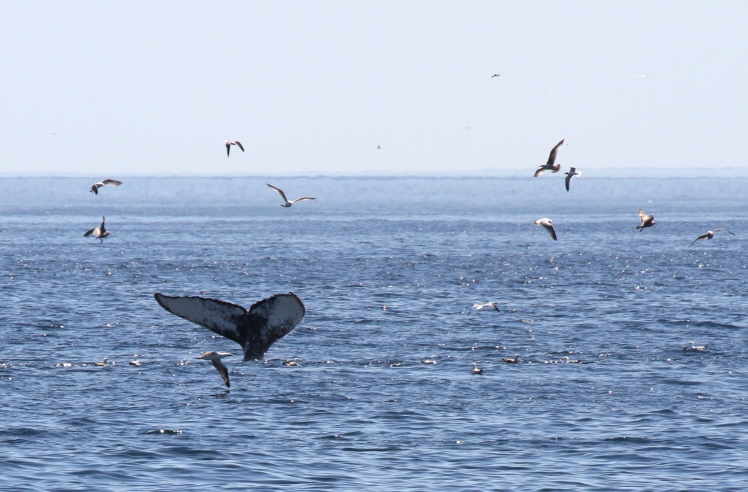