“Kanena provlema.” That’s what our taxi driver kept saying. Ultimately we made it, but getting the our kayaks, bags, and research equipment from the castle to the port on Naxos, and ultimately Paros was anything but “No problems.”

First, as you can see, the kayaks fit in his taxi only in the most generous of senses. We got them in, and what’s more, they stayed, but only just barely. Luckily he showed admirable restraint on the bumpy, usually speedy, roads between the Castle and the Blue Star Ferry terminal.

As you might have been able to guess, Menelia (a PhD student at the University of Antwerp, and a partner in previous expeditions) and I had 2 kayaks, our personal stuff for a week or more on Paros, and three different bags/containers with research supplies in them. Last year we had Anthony along to help with the juggling, however this year we were meeting Anthony on Paros so it was up to us to get it all on and off the boat. What’s more, we opted to take the high-speed ferry between Naxos and Paros which seemingly doesn’t even stop at the dock, just idles its engines long enough to get people on the ramp before it departs again. Poor Menelia, our plan was to do the loading in shifts – I took the kayaks and a few bags aboard and went out to help with the massive tupperware of heavy research supplies only to find that she’d been yelled at by the port authority in the 2 minutes I’d been gone to get on the boat or get left behind. She started hurriedly pushing the tupperware chest most of the way up the boat ramp while loaded down with 3 bags herself. We never did find the water bottles we’d bought for the trip, they got cast aside in the hubbub I think. She was the last on the boat and by the time I got back to her, maybe only 3 minutes later, they were already lifting the ramp to depart. 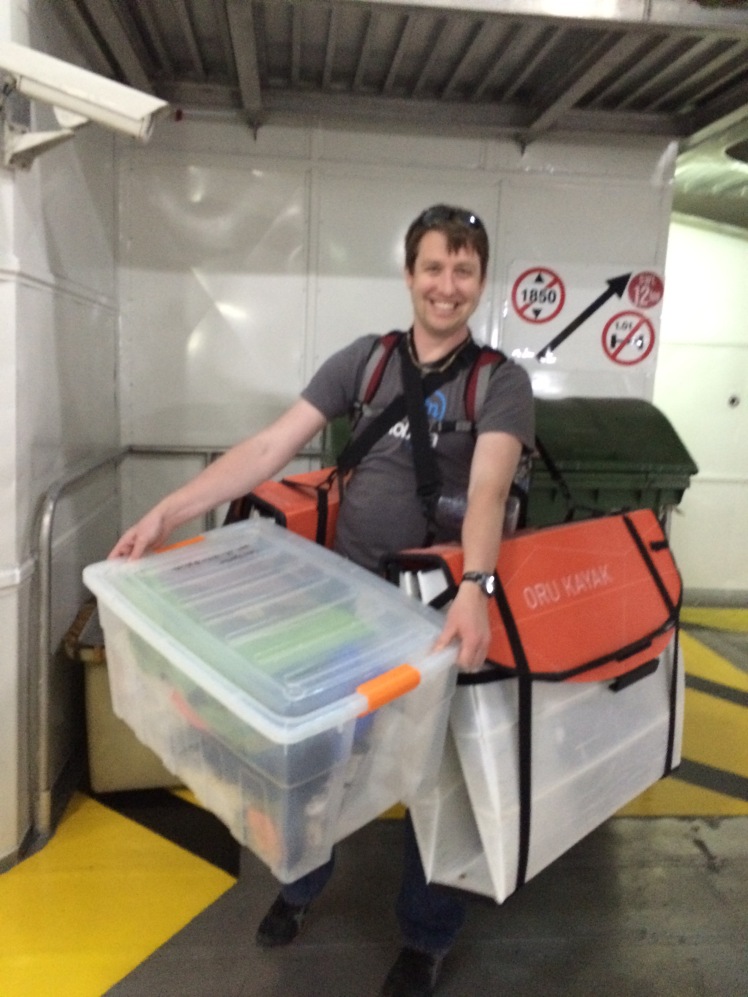 We managed our exit a little more carefully after the hectic and exhausting loading. Here we are, all smiles; though my smile is really a grimace — the double-crossed kayaks were cutting off airflow something fierce every time they shifted forward. The unloading was quite a bit easier though, at least we knew we’d be rushed and so were in the starting blocks ready to go. We shuffle-sprinted down the ramp and dropped all of our supplies just on the jetty, careful to avoid the cars rushing past to get their spot on the ferry before it left.

And here we are, a view of the pile and the ferry just before it left. The pile doesn’t look that impressive but match the bags with the previous pictures for scale. With luck the rest of the trip should be a lot easier! (yeah, right…)

One thought on “Kanena provlema”